They also cast doubt about the profitability of their businesses in 2019.

More CEOs in the African continent have become increasingly pessimistic about global economic growth in 2019 and expect their businesses to suffer in the short-to-medium term as a result.

This is a finding contained in PwC's 22nd annual global CEO survey, which has been surveying the world’s chief executives since before the turn of the century — 1997, to be exact.

The survey, which was released on Monday, found that 25 percent of African CEOs surveyed were projecting a decline in global economic growth in 2019, up from a mere 10 percent in the previous year. 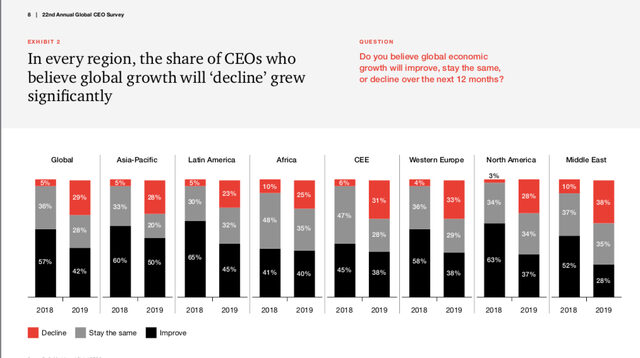 CEOs in Africa are also more pessimistic about chances of an improvement in global economic growth in 2019.

The survey found that 40 percent of African CEOs surveyed were projecting an improvement in global economic growth in 2019  – a one percentage point decline from the previous year.

Arguably, the pessimistic views shared by CEOs have implications for mergers and acquisitions (M&A) activity. CEOs that are optimistic about economic growth generally means that they are confident about the business and operating climate, which might in turn see them undertaking more M&A activity. Pessimistic CEOs are likely to be spooked by market conditions, which will result in them being cautious about investment decisions.

The survey features 1,378 chief executives in more than 90 territories, and was conducted in September and October of 2018.

Pessimism about the economy is fuelled by the constantly shifting policy landscape across the world which is dividing countries, the survey showed.

International trade tensions, political upset and uncertainty, and stricter monetary and fiscal policy all play out differently but with the same general result across regions: a more cautious outlook on global economic growth.

“Most major economic models have adjusted their 2019 forecasts downward. In fact, many economists see a slowdown as overdue.”

The survey featured views of CEOs in the US, Europe, Middle East, and Asia.

Overall, the survey found that 30 percent of those surveyed were projecting a decline in global economic growth in 2019, up from 5 percent the previous year.

In the Middle East and Europe the findings were starkest with 38 percent and 33 percent of those surveyed pessimistic about global growth for this year.

Meanwhile, optimism among North America's CEOs dropped the most sharply, from 63 percent to 37 percent, while the percentage signalling a slowdown in global growth moved from a negligible 3 percent to 28 percent.

Over-regulation is still the number one concern for global CEOs but policy uncertainty is now the second most important issue with trade conflicts also much higher on this year's survey.

CEOs also reported a noteworthy dip in confidence in their own organisations' revenue prospects over the short (12-month) and medium (three-year) term. If CEOs' confidence continues to be a leading indicator, global economic growth will slow down in 2019.