The worsening of economic and political risks would, in theory, create more distressed asset opportunities in any market. A tough market would also see a huge sell-off of assets and investors would be lured to buy distressed assets at cheap prices – spurring mergers and acquisitions (M&A).

But in practice, this is not the case in South Africa, said a top lawyer, who has seen a dramatic slowdown of M&A activity in recent months.

“For the first time, we can see our corporate clients feeling the pressure from the South African economy. You can feel the economy hurting and people are under pressure. Very few clients are saying that they are trading well,” said Doron Joffe, a director at ENSafrica and joint head of the firm’s corporate commercial department.

Doron is very close to the dealmaking community in South Africa and the rest of Africa as he is a highly-experienced lawyer specialising in M&A, corporate reorganisations, restructuring, takeovers, corporate finance, stock exchange transactions, as well as equity capital markets.

At a time when South Africa’s economy has slipped into a recession for the first time since 2009, and business confidence being deep in the doldrums, investors should ideally be on the hunt for bargain assets.  And M&A activity in such a difficult environment should be robust.

But Doron believes that domestic M&A activity has fallen dramatically so far in 2018 to the extent of being 50 percent lower compared with 2017.

“There are still transaction happening. Foreigners are still looking to acquire South African assets that are distressed in the mining and construction sector,” Doron told M&A Africa.

You don’t have to look far for reasons why the mining and construction sectors have suddenly piqued the interest of investors. On a cursory view, businesses in these sectors have been battered and might now present buying opportunities.

Construction companies have been hurt by the government’s declining infrastructure spending, which has forced companies to either sell their underperforming assets or voluntarily submit themselves into business rescue. The mining sector has suffered from low commodity prices and policy uncertainty created by the government dithering on finalising the Mining Charter, a set of rules aimed at distributing the industry’s wealth to historically disadvantaged groups.

With a tough economic climate and an environment fraught with policy uncertainty, more companies are starting to decline in value.
“But there is nothing going cheap in the market unless it’s extremely distressed. There are more people looking to sell than buy and the pricing hasn’t come down for there to be significant buying opportunities.”

For those buying – like foreign investors – they still view South Africa as an entry point for their rest of Africa expansion. Doron said they are still interested in sectors which are difficult to enter and have high capital costs in setting up operations such as construction, manufacturing, and retail. He said the mining sector will hopefully pique the interest of foreign investors following the publication of the new Mining Charter, which is largely seen by the industry to be less onerous.

It will take an improvement in business confidence to drastically boost M&A activity. But with a general election on the horizon in 2019, Doron said many investors are reluctant to commit to big-ticket deals. “After the elections next year, there might be policy and economic certainty and hopefully we will see more M&A activity.”

With a team of over 600 lawyers and 150 in the M&A department across the rest of Africa, ENSafrica has ambitions of doing more business in sectors across the continent including energy, infrastructure, financial services, healthcare and pharmaceuticals and agricultural. On the latter sector, Doron said: “Africa will become a much bigger producer than it is currently, and we think there will be a lot of M&A activity in that space as the world needs food.”

Asked for his top tip for concluding deals in a tough economic environment, he said patience is important. “Patience is required when helping clients understand the transaction process and that delays might arise in concluding transactions caused by regulatory or other reasons. You have to manage the expectations of clients.”

Away from managing expectations of clients in his high-pressure job, Doron is an avid golf and rugby spectator. But law runs in his family as his father was an advocate and court judge. When M&A Africa asked him whether he prefers his children to pursue a career in law, he remarked proudly that they should pursue their own career.

“My father didn’t encourage or discourage me in following a profession in law. But my children need to know that law is a hard profession and there’s a lot of late nights working.” 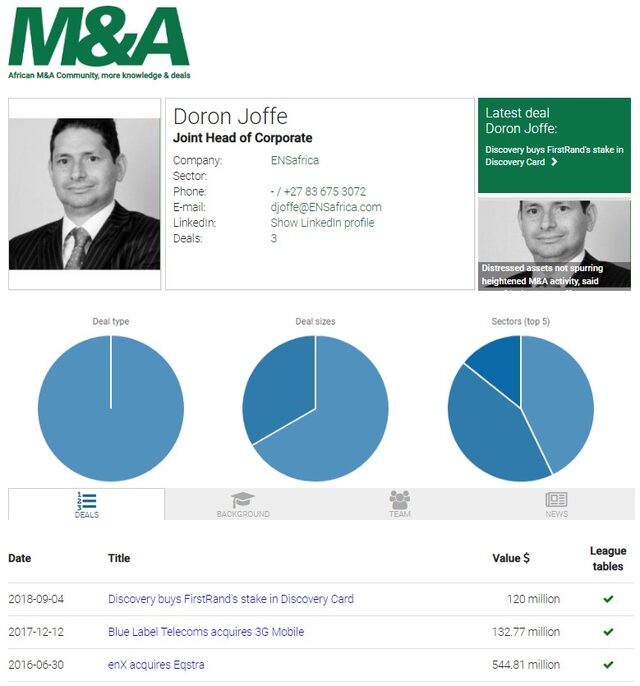