As a lawyer with more than three decades' experience, Norton Rose Fulbright's Kevin Cron has seen many economic and dealmaking cycles in South Africa.

Over the past 18 months, Kevin became concerned about what he saw as an alarming shift in the volume and size of deals by businesses and corporate firms.

“The sort of heightened deal flow that one would see a couple of years ago has really declined year-on-year over the past two years. At the moment, the level of dealmaking is at the worst it has been,” Kevin told M&A Africa.

“The number of deals that are around are people selling their South African businesses and leaving rather than new people coming in. There are a couple of brave souls coming in and investing, but not a lot. By and large, it is people exiting, which is bad news.”

You don’t have to look far for reasons on why Kevin is bearish in his views.  A negative economic climate in South Africa, the lack of business and investor confidence, the move to populist policies instead of policies that promote economic growth and welfare of the populace are to blame.

With a general election on the horizon in 2019, Kevin doesn’t believe that the government will address challenges plaguing the country with urgency.

“The consensus is that it is unlikely that one will see any dramatic action before the election. Cyril Ramaphosa [South Africa’s president] would want to consolidate his position within ANC and hopefully push forward with policies that will deliver economic growth.”

Kevin is a highly experienced lawyer who has been with Norton Rose Fulbright for 39 years, serving in various positions. He currently serves as the firm’s new chairman and was previously the head of corporate, dealing with regulations across competition, tax, real estate, and mining.

He has been involved in big-ticket M&A deals such as the 45 percent acquisition of mobile operator Cell C by mobile technology specialist Blue Label Telecoms in 2017. Kevin also advised on the exit of global financial services firm Barclays from Absa, with the former completing the sale of a 22 percent stake in the latter in early 2018.

But such big-ticket deals are becoming few and far between.

Although this is the case, it doesn’t mean that Kevin isn’t busy.  After all, there is some upside to slowing M&A activity. He has seen an uptick in work not related to M&A activity such as advising companies on their risk profiles in various industries and conducting forensic audits of a legal and accounting nature.

On a positive note, Kevin has seen more sub-Saharan Africa based companies pursuing secondary listings on the JSE. They are doing this with a view of wanting to grow and build scale to their operations.

Kevin is optimistic about the amendment of the Mining Charter by the government, which he said might boost M&A activity in South Africa’s battered mining and resources sector.

Asked what it will take to get M&A activity to recover and grow, Kevin said South Africa needs to introduce business-friendly economic policies and fix inflexible labour regulations.

Away from the stressful legal environment, Kevin enjoys reading, trout fishing in Mpumalanga’s Dullstroom, spending quality time with his wife and two adult children.  Kevin also plays golf but said he is “really bad” at it.

If he could change one thing about South Africa it would be growing the stagnant economy. Once this has been achieved, then the creation of jobs, reduction of inequality and crime will materialise.

M&A Africa wishes to congratulate Kevin on his appointment on October 4, 2018 as Norton Rose Fulbright’s chairman. 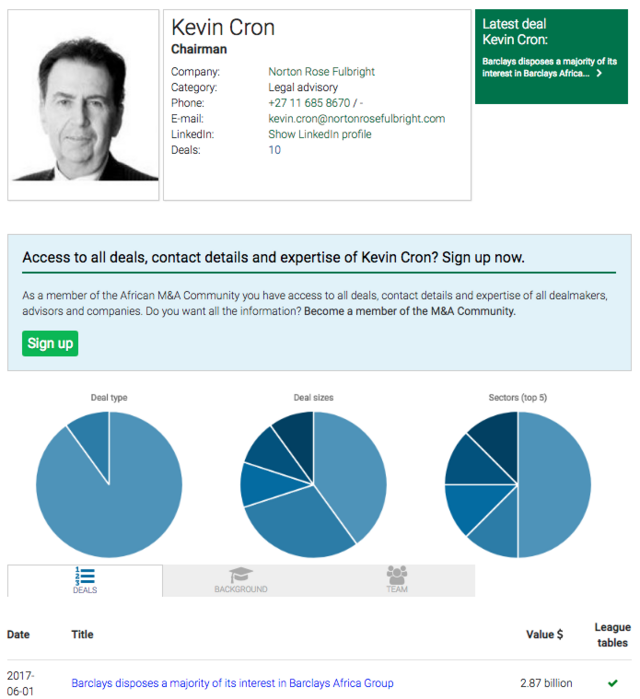