A PwC report finds that M&A transactions are still few and far between.

Although the outlook for Africa’s oil and gas industry is positive amid difficult operating and economic headwinds, mergers and acquisitions (M&A) are still few and far between, according to PwC’s eighth Africa oil and gas review.

The oil and gas industry in the African continent has battled with the collapse in international oil prices, regulation uncertainty around exploration rights and political instability.

This, PwC said, has resulted in companies restructuring their portfolios with a focus on established regions, less exploration, higher value plays with low break-even cost, and projects with shorter lead times and lower risk.

More risk in the oil and gas industry has led to companies embarking on less M&A transactions, which is reflecting in the decline of deal flow.

According to PwC’s review, overall upstream deal value declined by 70 percent between 2013 and 2017. Over the same period, Africa’s share of global upstream oil & gas transactions declined from 16 percent to 4 percent (see below). 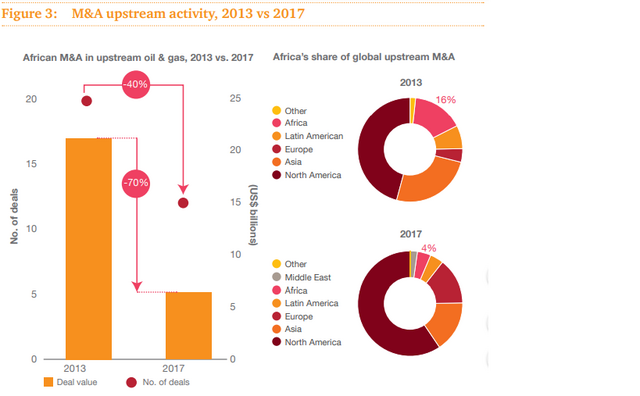 PwC’s Africa Oil and Gas Review, 2018 analyses what has happened in the last 12 months in the oil & gas industry within the major and emerging markets. It also focuses on the expert opinions of a panel of industry players from across the value chain who share their views of oil and gas in Africa.

Chris Bredenhann, PwC Africa Oil & Gas Advisory Leader, said Africa’s oil and gas companies have weathered the downturns and capitalised on the upswings.  In doing this, companies are focusing their efforts on new ways of working, reducing costs and utilising new technology.

As the oil price is steadily rising towards pre-collapse levels, the outlook for the industry is hopeful.

“It is, however, important for companies to avoid falling into the cost inflation trap that could eat into the profitability gains that should follow from the rising oil price. Keeping up capital discipline and further improving productivity will yield sustained results for the industry,” said Chris.

Africa does offer plenty of opportunities in the form of unexplored acreage and ever-increasing hydrocarbon demand fuelled by population growth, urbanisation and the emergence of a growing middle class, he said.

At the end of 2017, Africa is reported to have 487.8 trillion cubic feet of proven gas reserves – representing 7.1 percent of global proven reserves. Once explored, these gas reserves might boost M&A activity.

Africa’s share of global oil production has slightly increased by 0.3 percent since last year to 8.7 percent standing at 8.1 million barrels per day. The main contributors continue to be Nigeria, Angola, Algeria and Egypt.

The outlook for the oil and gas industry is looking more optimistic with the Brent oil price having broken through the US$70 mark from low-levels of US$40, said PwC.

In Africa, the recovery rate of capital expenditure (7 percent year-on-year growth) is expected to surpass global growth (5 percent year-on-year growth). Deepwater oil has been given preference over gas, and oil fields offering the highest rates of return are attracting investment. There is also a preference for brownfield over greenfield developments.