The year 2018 was a watershed moment for South Africa.

Politically, the country ushered in a new political administration with the election of Cyril Ramaphosa as President. Market watchers said Cyril’s election signalled that South Africa would embark on more market and business-oriented policies and anti-corruption efforts, which should lead to moral and economic recovery.

However, a volatile economic climate has resulted in steady GDP shrinkage in 2018, with the economy recording economic growth of 0.8 percent from the 1.4 percent recorded in 2017. The outlook for economic growth in 2019 isn’t inspiring, with many economists expecting negative growth.

And private equity funds are increasingly looking to deploy different pockets of capital for different purposes.  This has been confirmed by the Southern African Venture Capital and Private Equity Association (Savca), which said private equity has built up a substantial war chest and deployed it through investments over the past year and decade.

This is according to Savca’s 2019 Private Equity Industry Survey, which surveyed 47 managers, representing 82 funds, with a mandate to invest in South Africa and other African markets. The survey has been tracking investment activity since 2001.

Tanya van Lill (pictured), the CEO of Savca, said the uptick in investment activity is indicative of the resilience of the private equity industry. She further noted that amid the numerous investment opportunities available in South Africa, investors were increasingly looking to private equity.

See below in which sectors the private equity investment activity of R35.4 billion in 2018 went into. 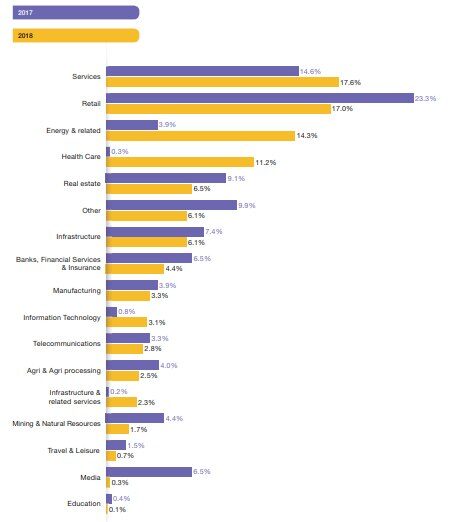 A total of R12.8 billion was raised by private equity funds in 2018, compared with R7.5 billion in 2017, representing a growth of about 70 percent.  Of the total funds raised, 55.5 percent of the funds earmarked South African investments and the balance went into the rest of Africa.

“This is an impressive figure (the 12.8 billion raised), given the relatively downbeat macroeconomic climate in South Africa (real GDP was recorded at a mere 0.8% in 2018). That being said, the industry also benefitted from initiatives such as the government’s drive for foreign investment and the increased interest shown by local pension funds to invest in real assets which include private equity,” said Tanya.

Although the private equity industry is still small in South Africa, it is growing and becoming more sophisticated compared with the rest of the African market and other emerging markets.

This compares with 0.02 percent for Nigeria, 0.1 percent for Brazil, 0.01 percent for Russia, 0.47 percent for India, and 0.2 percent for China. Developed markets such as the UK and US have a private equity capital penetration of more than 2 percent.

“This is a testament to the fact that emerging markets private equity continues to, not only provide investors with exposure to the private sector via private or unlisted companies and attractive returns, but also the opportunity to truly make a positive impact as investors and investees walk their journey together,” said Tanya.

“As the region’s economies continue to expand, so will the demand for the financing offered by private equity.”