The recent efforts of raising nearly R290 billion worth of investment pledges from local and international companies by South Africa’s president Cyril Ramaphosa is expected to boost economic growth and employment, says PwC.

According to PwC’s report titled Realising the vision, the investment pledges would add an estimated R338 billion to South Africa’s gross domestic product (GDP) over the 2019–2024 period. An estimated 165 000 direct and indirect jobs are expected to be created over the same period and R59 billion is expected to be generated in additional government revenue.

The value of investments that companies have pledged to South Africa’s economy was announced at the inaugural South Africa Investment Conference in October 2018.

The investments were part of the drive to raise $100 billion (R1.5 trillion) over the next five years by Ramaphosa at a time when he attempts to revive South Africa’s economy that faces a 27 percent joblessness rate, waning investor confidence and political uncertainty ahead of a general election in 2019. 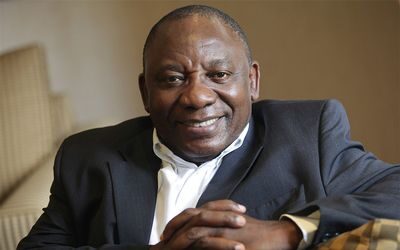 Many mergers and acquisitions (M&A) professionals have warned that South Africa remains unattractive for deals given its anemic economic growth, which is expected to be 0.8 percent in 2018. More M&A professionals are increasingly bypassing South Africa for investments, as they are on the prowl for deals across sub-Saharan Africa, where investment prospects are complimented by high growth economies, rising population and consumerism, and diverse sectors that are ripe for disruption.

But multinational companies have put their money where their mouths are, by pledging billions to South Africa’s economy despite many challenges.

Among the companies that have pledged investments are;
•    Mining company Anglo American plans to invest R71.5 billion between 2018 and 2022 on maintaining and expanding its mining operations in South Africa.
•    Africa’s largest technology company by market value, Naspers, pledged to invest R6 billion over the next three years in South Africa’s technology sector.
•    Sappi, the world’s biggest producer of dissolving wood pulp, is planning a R7.7 billion upgrade and expansion of its Saiccor Mill.
•    Packaging company Mondi will invest R8 billion in expanding its capacity.
•     Vedanta Resources has made a commitment of R21.4 billion to be invested in a zinc mine project and processing plant. The investment will also go towards a smelter and refinery complex.
•    Mercedes Benz has committed R10 billion to expand its manufacturing plant in East London, Eastern Cape.
•    Ivanplats platinum project plans to invest R4.5 billion in developing mines in South Africa.

See graph below of investments in different sector. 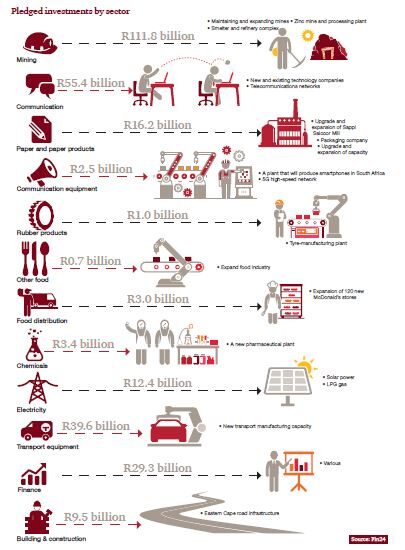 PwC also estimated that the investments would enable about R468.8 billion in potential production from 2025 to 2035, which would then add an estimated R505 billion to South Africa’s GDP, create and/or sustain an estimated 116,000 direct and indirect jobs per year, and generate an estimated R133 billion in government revenue.

The National Development Plan, which is a long-term economic and social development policy adopted by the government, aims for total fixed investment to rise from below 20 percent of GDP at the start of the current decade to 30 percent of GDP by 2030.

“The most important factors affecting South Africa’s FDI inflows over time were the quality of governance, political stability and property rights — all hot topics in the country at present. Other key factors explored in the report include trade openness, efficiency of government regulation, safety and security, quality of infrastructure, control of corruption and policy continuity,” PwC said.