A growing middle class and diverse sectors pique the interest of foreigner investors.

Foreign dealmakers have been nervous about investing in the rest of Africa after the sharp oil, commodity price and currency slump that hit a number of countries between 2015 and 2016.

However, there now seems to be an improvement in the African continent’s economic growth outlook and political stability, which has piqued the interest of investors and dealmakers.

A rapidly growing middle class and diverse sectors that are ripe for disruption in the African continent has prompted foreign dealmakers to identify the continent as their next big growth story.

This is a trend that Warren Drue, a highly-skilled mergers and acquisitions practitioner at Hogan Lovells, is seeing. Warren — whose nearly 30 years of experience spans across mergers and acquisitions, corporate finance transactions, equity capital markets, and cross-border transactions — advises South African and foreign dealmakers acquiring assets in the rest of Africa.

“We are seeing the bulk of the M&A activity at the moment coming from sub-Saharan Africa. Some countries in the continent are becoming opportunistic investment destinations,” Warren told M&A Africa.

Warren said investors are currently excited about Kenya, Zimbabwe, Botswana, Zambia, and Rwanda. Hogan Lovells is close to transactional work in these countries given its global presence and widespread client base.

“Kenya and Zimbabwe, for example, have come out of elections. Both countries have settled politically and have become opportunistic investment destinations. International corporates are seeing much more stability in their policies which enables them to make calculated investment decisions.”

Warren said sectors that are finding favour with investors across sub-Saharan Africa include agriculture, consumer goods, ICT and tourism and leisure. On the latter sector, Warren was involved in a transaction by Accor Hotels, the third largest hotel group in the world, where it acquired 28 hotels across sub-Saharan Africa this year. “It was a great transaction as the transaction is a springboard to drive Accor's expansion plans across the Middle East and Africa" said Warren.

He said foreign investors are increasingly seeing Kenya, Zimbabwe, Zambia, and Rwanda as an entry point into the continent. So where does that leave South Africa, which has traditionally been the gateway into Africa owing to its sophisticated financial markets and certain infrastructure advantages?

“There is no doubt in my mind that this policy uncertainty in the country is shutting doors. We have had M&A deals put on hold and deals withdrawn until investors have certainty as to policy. Investors like nothing more than consistency and stability."

Warren cited a major agriculture transaction for an international investor which has been put on hold due to land expropriation concerns.

“The deal might come back if economic certainty is restored and the land expropriation policy is implemented in a measured way. But foreign investors are realising that they have other safer and better environments to invest in where they can reasonably calculate some form of return for their shareholders,” said Warren.

Although the economic and political climate in South Africa is difficult, Warren remains optimistic. “We are a resilient nation and we can get through this.”

Lawyers are not the only ones seeing the slowing deal flow, but investment bankers, advisors and private equity players are also feeling the pinch.  But the slowdown doesn’t necessarily mean that Warren is not busy. He’s doing a lot of work in restructuring and internal reorganisation of large corporates – work not related to M&A.

Away from his high-pressure job, Warren enjoys a session in the gym, reading and spending time with his wife and children. He also enjoys mentoring his young colleagues.  Warren’s top tip for concluding a deal, which he constantly imparts to his colleagues, is the importance of getting a deal done.

“I always tell the lawyers in my team to not let personal agendas get in the way of closing a deal. Clients’ interests always come first.” 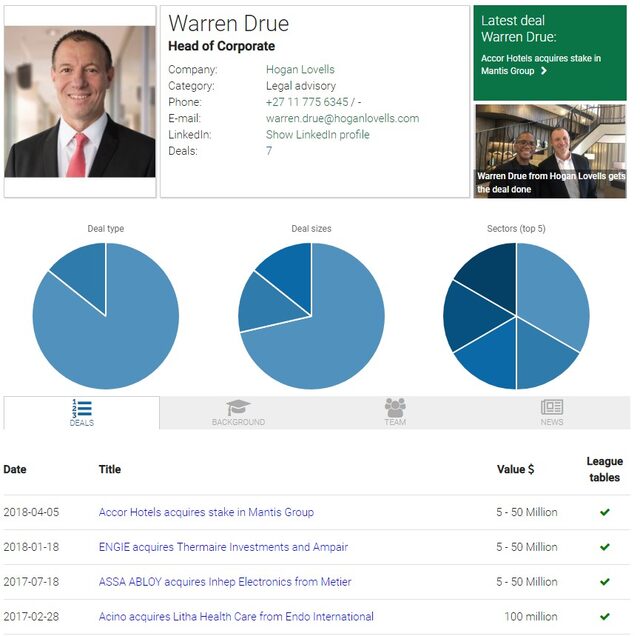