There is no debating that South Africa's fiscal finances are in a dire state.

The entirely justifiable counter-cyclical fiscal expansion that followed the 2007/08 global financial crisis has been supplanted by a decade of inexplicably loose fiscal policy and sub-par macroeconomic growth. Before accounting for the seemingly inevitable crystallisation of Eskom’s contingent liabilities to the fiscus, South Africa’s “lost decade” has resulted in the doubling of public sector debt – from 26 percent in the 2008/09 fiscal year to 57 percent (and counting) at present.

Eskom is a state-owned power utility that produces more than 90 percent of South Africa's electricity.

Two key questions need to be answered to determine whether these fears are well founded:

Firstly, central to determining South Africa’s debt sustainability over the medium term is an examination of the country’s debt profile and debt burden indicators. To avoid a debt trap, what we ultimately need to form is a credible view that the primary budget surplus required to stabilise the country’s debt burden is attainable in the medium term. In this economic environment, a primary budget surplus in the medium term (forthcoming five years in IMF lexicon) will only realistically be achieved through average economic growth in excess of 2.6 percent over the next five years, assuming all else is equal, or cumulative expenditure containment of R150 billion over this same period.

However, the domestic economy is simply inadequately geared to sustainably grow in excess of 2.6 percent in the medium term, so we can largely discount this as a credible solution to achieving debt sustainability. Mercifully, in preparation for the 2020/21 national budget, National Treasury has issued a compulsory budget baseline reduction of five percent in 2020/21 fiscal year, six percent in 2021/22 and seven percent in 2022/23, which, if adhered to by national departments and public institutions, can be read as an important first step away from the fiscal cliff.

Related to the assessment of the sovereign’s debt burden is its debt profile. Despite South Africa’s burgeoning funding requirement in the past decade, the financing thereof has been astute. The deficit has been predominantly financed through the issuance of long-dated nominal bonds. National Treasury has shied clear of its 20-25 percent prudential limit to inflation-linked bond issuance and, most importantly, the so-called “original sin” of foreign currency debt issuance has been well avoided, with a modest 5.5 percent of outstanding gross government debt denominated in foreign currency. This is a crucial differentiator between South Africa and the basket of sovereign nations that have fallen off the fiscal cliff in the post crisis era (see Figure 1). The importance of low foreign currency debt issuance coupled with a free-floating exchange rate regime, which by design acts as an economic “shock absorber” – adjusting as and when appropriate to facilitate a Balance of Payments equilibrium – cannot be overstated for the effective management of Balance of Payments risk.

Consequently, while South Africa’s economic outlook hasn’t looked gloomier in the post-democratic era, it is still too early for the ignominious calls for external debt relief from the IMF. Significant time has been wasted, trust eroded and economic damage caused in the past decade, but there remains a brief window of opportunity for policy makers to swallow the bitter pill that is fiscal probity and resolutely enact growth-enhancing structural reform – South Africa’s sovereignty depends on it. 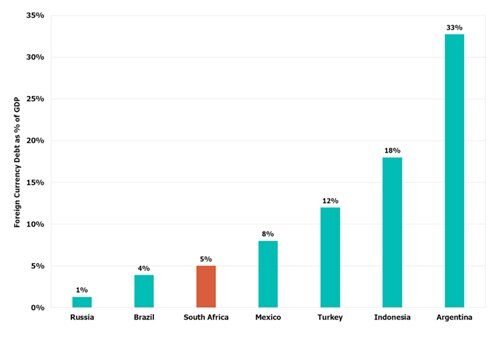 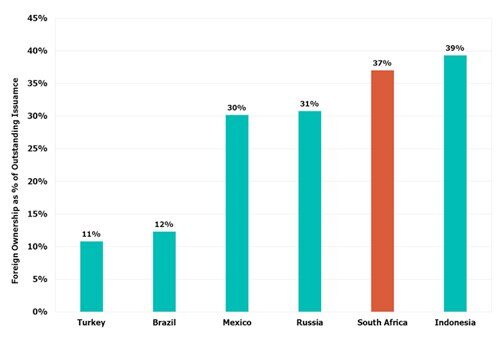 Refilwe is a research analyst, Yunus is an interest rate market analyst and Rhandzo is a portfolio manager.